Focus Formula For CEO Coaches (How To Launch While Still Employed)

There’s nothing more satisfying than finally being able to transition from a mundane corporate job to the coaching career you’ve been dreaming of for so long. Trust me, I’ve been there! But the beginning of that transition can seem terrifying if you don’t have a clear understanding of your goal and how to achieve that goal.

What you need is a focus formula. Don’t let fear be the reason that you put off your ambitions for 10+ years.

This week on The CRUSH Method Show, we want you to be able to hear about the hardships that we experienced along the way, learn from that portion of our journey and quickly get to the success of launching your coaching program.

We’re not saying that you won’t have hardships of your own or that this will be a walk in the park, by any means, but receiving guidance from someone with experience will benefit you immensely.

Be real to yourself, hold yourself accountable, be aware of the areas you’re spending your time, and keep a prioritized focus on the important things that are going to keep the process moving toward your launch goal, Coach!

Come join the CEO Coach Community at The Coach’s Plaza at www.thecoachesplaza.com
Get the full vlog, transcript, and mp3 at https://bit.ly/3tLvxrW 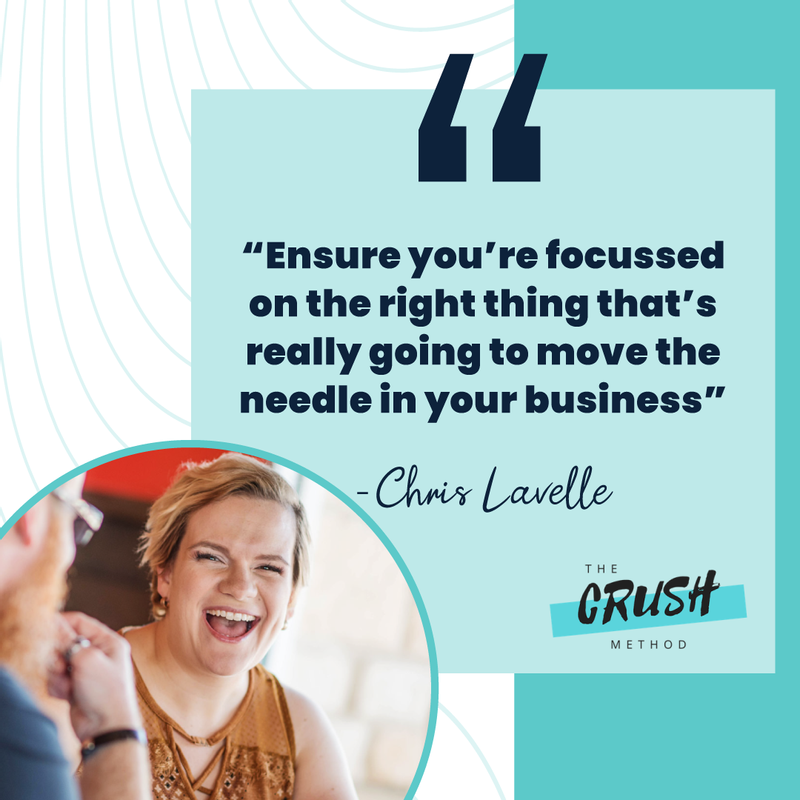 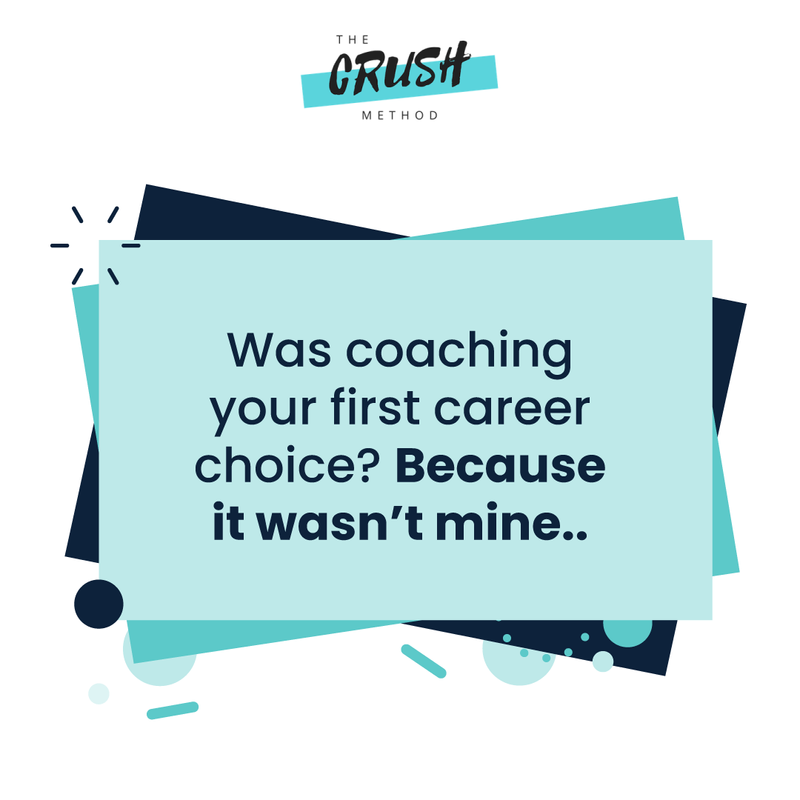 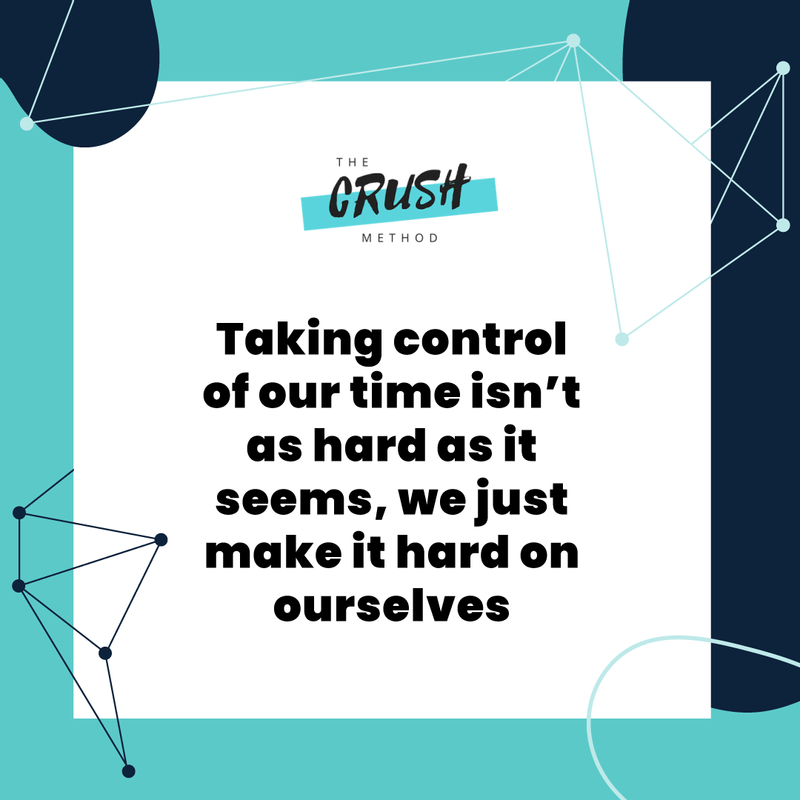 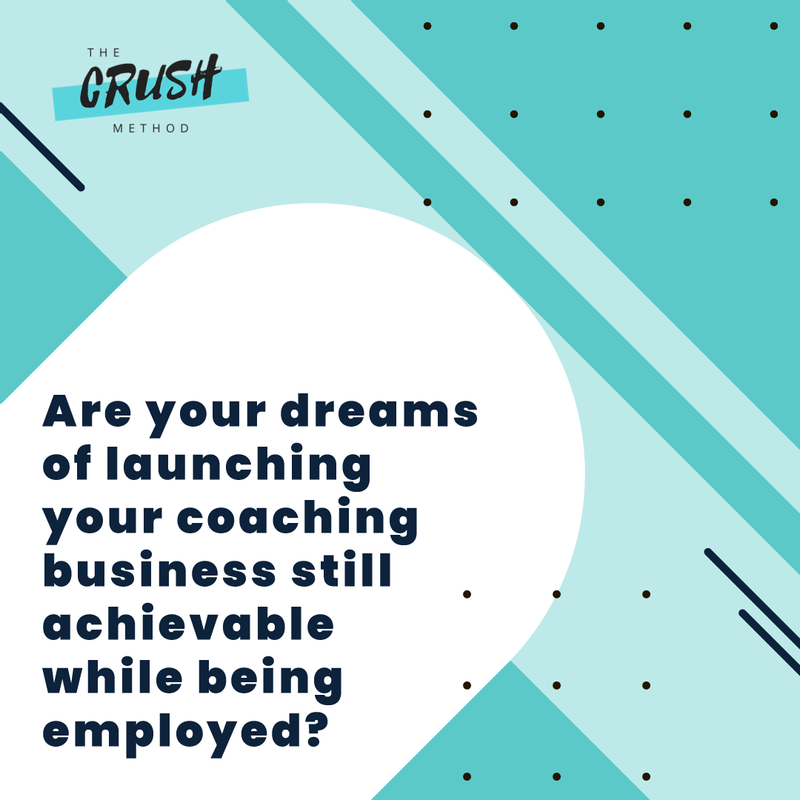 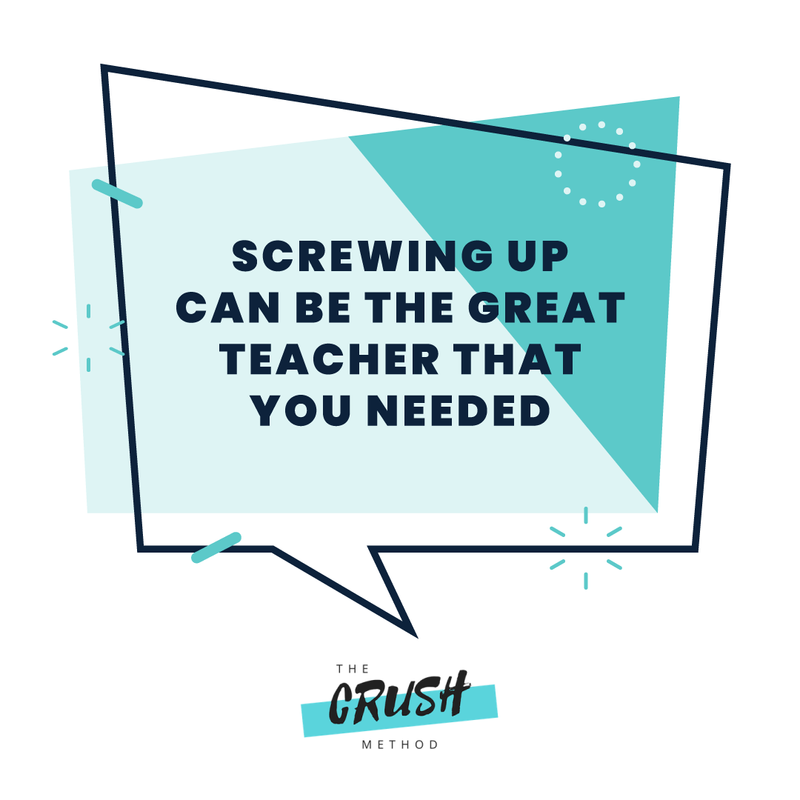 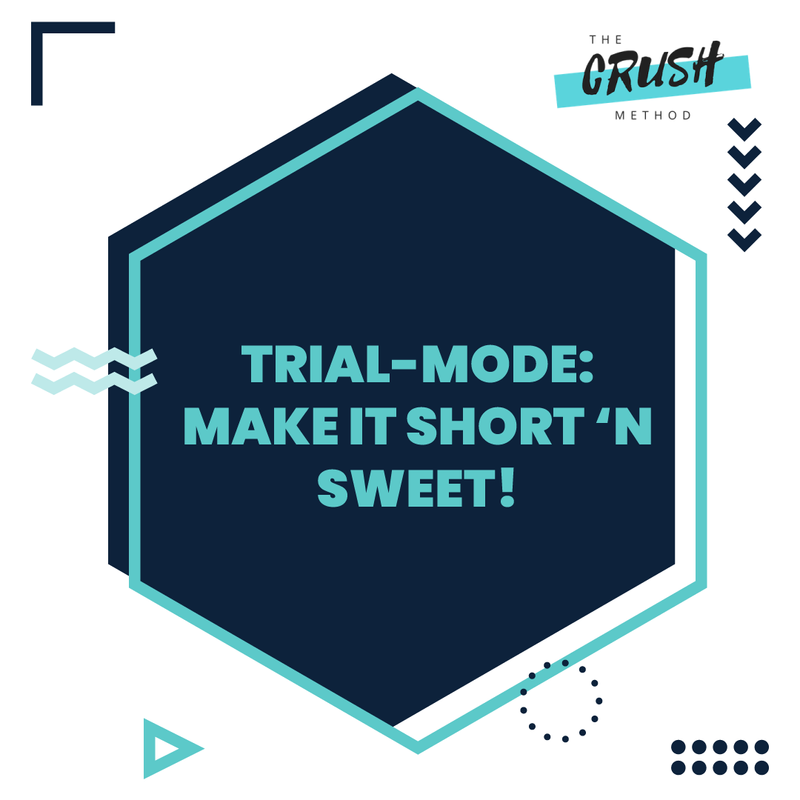 Our Focus Formula for CEO Coaches

Hey, Hey Amanda here and Chris Lavelle. And we have just finished talking about focus. Keeping your eye on the ball. Yes. Now being focused in building your coaching business is a huge challenge. If you're coming from a background like we did, you know. Well with corporate nine to five roles, there are a lot of distraction, competing demands. You are traveling every week,

46 weeks out of the year. So we get the distraction and lack of focus that can happen when you're maybe still in another role. Plus, I was super pregnant. That's right you were, you were almost done with bakin' our fourth little one, and we already had three others running around. Exactly. And, and our situation's not a lot different than most other coaches.

You know, coaching is typically a second, third or fourth career for people, you know. Nobody really goes straight into coaching after high school. I've seen it once. One time, but they didn't stick with it. But usually folks need experience to be able to impart some good coaching. That's the benefit of experience is now you can share it to help others that are not quite as far along as you are.

So that means this is a second career for a lot of folks and they're transitioning or seeking to transition from something else that pays the bills to be able to do this full-time and have it pay the bills. Exactly. Exactly. So what we have been talking about is our focus formula for coaches, also known as how to actually launch this thing, if you're fully employed,

right? And for a lot of coaches, they start out with a side hustle. That's right. That's right. That's how you started. That's how I started. Things like that. Obviously you gotta pay the bills where you're going along, but if you don't actually get started really in the business, well, then it never gets going. And then that stretches into two years and five years then 10 years.

And before you know it you're 10 plus years later and you still haven't started that coaching business that you have on your heart. Exactly. Exactly. Now we are never, and never have been, and never will be the get rich quick coaches. No, we drive a minivan. We do. And we're not going to, I think we might pose on a Lamborghini sometime in the future,

but only to make fun of it. Only if we're going to make fun of it, because we're not Lamborghini coaches. We're not Insta models. We're real people, probably not unlike yourself, but through some work in what we share here, we've successfully made that transition from a successful corporate or prior career professional path to having a real successful coaching business. Yeah.

And that's success that is definitely hard-won success, like it's the kind of success where you really screw up a lot for a long time. It can be a great teacher too, but we didn't want that for you. So that's why we help give me the things that actually move the needle. Exactly. So there's three things in the focus formula that we really,

We see that all the time too. Like I'm giving away my services for free. I'm always testing. I'm always trialing, Oh, I've got a new program I'm testing, I'm trialing. And they're like always in test and trial mode and they don't actually get into real business mode. That's right. Right? And that's tough. That's a tough switch.

Yeah. They're just trying at the business goals instead of getting real about the goals and what they really need to do to move forward. And then of course, as Amanda said, you've got to stop breaking those promises to yourself and actually get moving on them. I would say the word to describe that in general is you have to have conviction. Real conviction for what you're doing,

because there's going to be a lot of things that throw you off your path. And if you are in the habit of basically blaming all of those external factors and not taking real ownership and having real conviction over your dream, then you're not going to get it. Well, that's true. I mean, you tend to be your own worst enemy with that.

And the way around it is to really get clear on why it is you want to do this thing that you have on your heart to do in a coaching biz Exactly. Exactly. The second big thing is to get real about your time. Human beings are terrible at telling time. Yeah, we did not evolve with a watch on her wrist. That's a modern construct about the closest we ever got was day, oh,

the sun came up and night, oh, the sun went down that's the extent of it. Yeah, exactly. Most people have no idea how much time they spend on anything. Well look at time in your phone, scrolling on social media before you know it, you scroll for 30 minutes looking at memes and jokes and that 30 minutes is gone. It's just gone. Do You remember when I first showed you the screen time setting?

not helping my dreams come through, through and true and creating the coaching business that we wanted to create. I remember that. I mean like you, you, you literally sat down at dinner that day and it was like fist goes down on the table and he's like, something's going to change. And, and, and you did. And I did. That was that conviction again.

Yup. Yeah. Yeah. And it is a struggle. Absolutely. It is a struggle. And I will be the first to put my hand up and say, I've gone back to my memes on occasion just because that's kind of the trick. It's a good outlet. Well, it is. But it's also kind of the way you trick yourself, because to your point,

you got to get real about time and before you know, it you're back in wasting that time again in the scroll. Yeah. It's so easy to do. And I, and I'm the same way. I'm, I'm, I'm no hero. It is easy to get sucked into the scroll. And especially just the way the phones are engineered. There have been many documentaries on this.

If you want to watch another addictive platform on Netflix. Well, you know what, they literally engineered to be addictive. Well, sure. And when we talk about the scroll, we're not just talking about phones and social media and things like that. The scroll could be all the other distractions in your life that are distracting you away from the reality of how much time you're taking away from your coaching biz.

That could be your kids coming up with questions every few minutes. It'd be your to-do list. You're just psyching yourself out by adding the, you know, so many things to your to-do list. So I think, you know, getting really real about your time is very challenging for most people to do and it's so worth it. So the third big piece in the focus formula is that it's not actually about having 50 things on your to-do list.

It's about having the right few things on your to do list. The right priority, having a process to help ensure you're focused on the right thing that's really going to move the needle in your business. Exactly. And for most coaches starting out, we are so bombarded with, you know, certifications, other coaches talking about whatever it is that they do. You've got to do this.

Then you've got to do this and gotta to do this. And before, you know, you got 10, 50 things like Amanda was talking about that are all clamoring for attention and you don't know which one to work on first. Exactly. They all scream. I'm important. And you're like, I don't actually have the experience to know which things are important.

So, which is why it was so important for me in my own process to hire coaches and to invest in programs, mentors, and mentors. I mean, we don't expect even like, if, if you're a hairdresser or something like that, we don't expect a hairdresser to just walk into a salon one day with a pair of sheers and suddenly be able to,

you know, do the thing Hairdressers do it. It takes experience. It takes time. It takes processes and learning. And so where did they get that? They got it from somebody more experienced than mentoring, for example, that helped them show them, Hey, you need to focus on these things first, when you get those things, then do these things next and on and on and on.

Exactly. And if you, if you come from like maybe a traditional entrepreneurship background where you have no experience with online marketing, for example, you know, you may have to go back to school a little bit and figure out what, what matters to be able to discern where you should be spending your time and what the right process is going to be.

So, you know, obviously we work with coaches, we help coaches to do that, that sort of thing in our programs. But you know, the first thing you should probably consider doing is come join us in The Coach's Plaza. Come join us. Yes. The Coach's Plaza is our free Facebook group where we share trainings like this and more robust,

every single week. Lots of value in that, in that group. And we are all about helping a serious entrepreneurial CEO coach get their serious, amazing clients. Right? That doesn't mean there's no fun, but it does mean that we cut a lot of the fluff and we give you the straight real talk about what you need to do to build a real coaching business.

So we hope to see you in the group. Thanks for joining us today. All the best Coach! Bye-bye!

Get Our 3-Part 5-Figure Monthly Coaching System Apr 16, 2021
How To Have It All Without Doing It All As A Coach Apr 09, 2021
Our Tiny Hybrid Formula: Higher Value Programs That Don’t Take Forever To Launch
business coaching coaching community strategy
Apr 02, 2021
Close